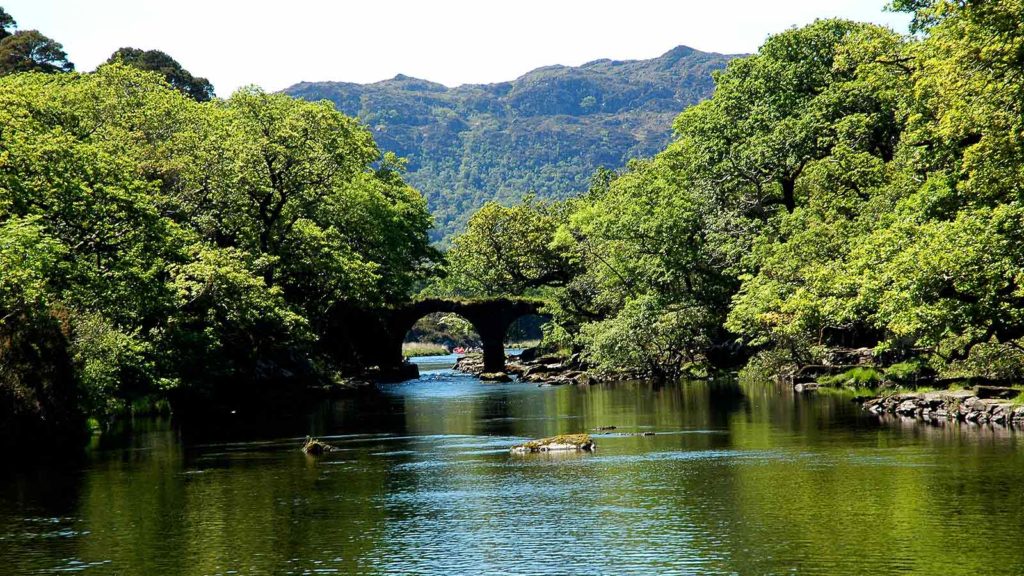 Killarney’s Holiday Village is set among some of the world’s most beautiful scenery, including the Gap of Dunloe. A dramatic landmark between the McGillycuddy Reeks and Purple Mountain, the Gap was chiselled out by glaciers some 2 million years ago and is renowned as the most remarkable glaciated valley in Western Europe.

Attracted by its geological treasures, magical legends, potential for hiking and climbing, or simply by the stunning nature of the surroundings, visitors stream to this unique landmark year after year. Make time for it the next time you are in Killarney.

The Gap of Dunloe is just under 18km from Killarney’s Holiday Village. Travel the N72, in the direction of Killorglin and take the turn off after Fossa Church, following the signs until you reach Kate Kearney’s Cottage bar and restaurant at the entrance to the Gap. Here you can park, and either walk, cycle, hire a pony or take a jaunting car ride between the imposing cliffs, where an unpaved road winds its way for 9km through rugged scenery around the Serpent, Auger, Cushvalley, and Black lakes.

For an unforgettable day trip, however, you can take a guided tour of the Gap from Killarney town. A bus brings you to Kate Kearney’s Cottage, where you travel on foot or via pony or jaunting-car through the Gap and a take an invigorating boat ride through the three lakes of Killarney back to Ross Castle.

The renowned Gap of Dunloe tour leaves Killarney via bus at 10.30am. From Kate Kearney’s Cottage, you can choose either to walk about 2 ½ hours or hire a pony or jaunting car (extra cost) through the spectacular mountain pass, following the route of the River Loe and its five lakes.

You have lunch at the picturesque Lord Brandon’s before the boatmen collect you at 2pm for the enchanting experience of a boat ride through the Lakes of Killarney. You will pass the ancient oak woods of Derrycunnihy and Tomies mountains, the convergence of the three lakes at the Meeting of the Waters, the “shooting of the rapids” (if water levels permit) under the Old Weir Bridge, Dinis Cottage, the three-thousand-year-old copper mines, and monastic Inisfallen Island, before alighting at the 13th-century O’Donoghue stronghold Ross Castle. En route, expect to be entertained by legends and tales from the local boatmen.

Groups can arrange to be collected from Killarney’s Holiday Village, and you can also organise a barbecue at Lord Brandon’s Cottage.

For those who prefer to do their own thing, go down to the main pier at Ross Castle between 9.30am and 11am before the boats set off to collect the day trippers from Lord Brandon’s Cottage. The boatmen will carry your bike for you if you would like to cycle through the Gap of Dunloe in the reverse direction.

Where Can I Book the Gap of Dunloe Tour?

There are several reputable Gap of Dunloe tour operators, most of whom will collect you in Killarney town or from your accommodation at Killarney’s Holiday Village:

Have you done the Gap of Dunloe trip? We’d love to hear about your experiences!